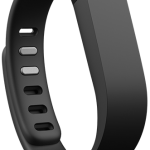 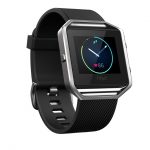 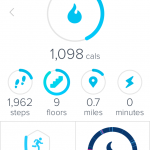 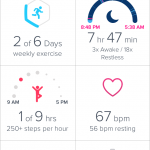 I’m a nerd when it comes to tech stuff. I don’t think I’m an extreme nerd, but a nerd nonetheless.

So I’m excited to share with you my review of the Fitbit Blaze.

My wife has had this basic Fitbit for years (the Fitbit Flex): 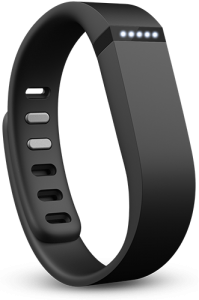 This Is The Fitbit Flex (not the Fitbit Blaze)

And she’s loved it and it’s definitely helped her to exercise more. But with the release of the new and improved Fitbit’s since she originally got the Flex, she’s been itching to upgrade.

So finally…on June 25th we both bought the Fitbit Blaze – 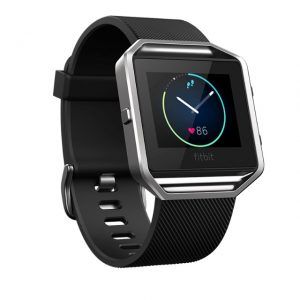 Here’s a quick rundown of the Fitbit Blaze 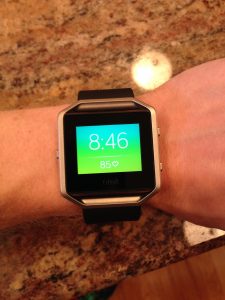 The Fitbit Blaze is a fitness watch that’s designed to track your steps, your heart rate, your sleep, your workouts, and more.

It even has some built in workouts, and if you’re a runner you can use the connected GPS* so you can map your routes and see stats about your run.

*Connected GPS: I originally thought this meant it had GPS built in, but you have to have your phone nearby because it uses your phone’s GPS through bluetooth. That’s not as cool, but I’ve heard if the GPS was built directly into it, it would drain the battery super fast (which would obviously not be good). And even the Apple watch (which is way more expensive) also requires your phone to use the GPS.

Here’s what I don’t like about the Fitbit Blaze

It’s not waterproof. It would be awesome if it was waterproof so I didn’t have to worry about taking it off while at the pool, showering etc. Not being waterproof is definitely not a deal breaker but it would be a nice feature.

I wish it gave me more data on my sleep. I know sleep is so important to our overall health. Our sleep can help us to burn more fat (when we’re getting quality sleep), and it’s vital for recovery and growth from our workouts.

So it’d be awesome if I could see when and how long I’m in the REM sleep stage during the night (that’s the deep state of sleep where we dream; getting into that state is critical to getting a good night sleep). However, the Fitbit Blaze does give you good basic info on how you’re sleeping, how often you wake up during the night, when you’re restless, etc.

I wish it integrated with chest strap heart rate monitors. The Fitbit Blaze uses an optical sensor that detects your blood flow in your veins to determine your heart rate. Crazy huh? As cool as that is…I’ve heard mixed reviews regarding this technology.

I’ve heard some people say it’s accurate, and others who have had problems with it. I’ve also heard during high intensity workouts it can have trouble keeping up with your heart rate.

So while the “optical heart rate” technology is still being improved, I wish the Fitbit Blaze could be integrated with a chest strap monitor.

Here’s what I do like about the Fitbit Blaze

I love all the data it gives you. Here’s a couple previews of the main screen inside of the Fitbit App (just click the image to see a full size view): 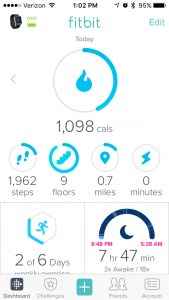 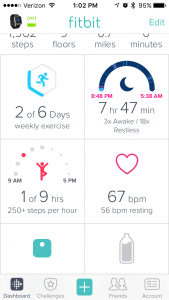 You can also tap on each item to get more detailed info and also to see charts, and graphs which make it really easy to see what’s happening.

They also have an online portal that you can access from any Internet Browser that gives you even more ways to see the data. All this data is useful because it can help you see areas you’re doing awesome at, as well as areas you could improve on.

I love that it monitors my heart rate 24/7. Even though I’ve heard the optical heart rate technology may not always be accurate while doing high intensity workouts, I’ve read that it’s dead on accurate when just doing other normal day-to-day activities.

I love the simplicity of it. Setting up the Fitbit out of the box was incredibly easy. The app that you download to your phone is also very easy to use. Lastly, the watch itself is very very simple to operate and everything is intuitive.

They also make it simple to learn more about your Fitbit with links to tutorials that show up when using the app.

I love that you only have to charge it every 5 days or so. It seems like everything needs to be charged these days and it’s always annoying when something dies when you need it. So I love that the Fitbit Blaze has a longer battery life when compared to other fitness trackers, and smart watches. The more expensive Apple watch for example, has to be charged every day.

On the otherhand, per Fitbit’s documentation, they say that the Blaze only needs to be charged roughly every 5 days (depending on how much you use it). I’ve found that to be true.

I could go on and on regarding what I like about the Fitbit Blaze. I think it’s awesome and I’m really glad my wife and I got one.

Should you get a Fitbit Blaze?

That’s something you’ll have to decide for yourself, but I really like the Fitbit Blaze and I’m definitely going to continue using it.

Like anything there’s pros and cons to the Fitbit Blaze. But overall I think the pros outweigh the cons, and if you want access to helpful data that can aid you on your fitness journey (estimated data on how you’re sleeping, calories you’re burning, steps you’re taking, your heart rate, etc.) then I say go for it.

Is it a required fitness tool? Absolutely not. But it is a cool fitness tech toy to have. :-)

Lastly, in case you’re wondering, I bought mine through Amazon here because it was the best price, and there didn’t seem to be any added perks to go direct through Fitbit.

Hope this helps you and you enjoyed this Fitbit Blaze review!

If you have questions, or comments, let me know below!