How To Survive Tailgating Season 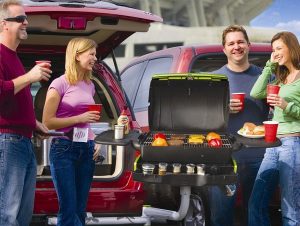 As the middle of September rolls around, you can feel it in the air. Football season is upon us, and that means it’s high time for the tailgating party. Nowhere else do so many social eating pressures come into our lives at once. You thought it was hard to turn down grandma’s cookies that she baked just for you. Now you’ve gotta convince your friends that it’s cool to be on a clean eating plan. Oh, and you actually have to avoid temptation too.

Is there an easy way around tailgating season? Well, nothing about changing your body and taking a completely new path in life is easy, but it is manageable. There are a few things you can do to get through tailgating season and still have fun. You’ve just gotta watch out for the little things that can get you.

Arrive as full as ever.
Look. Just between us bros here, I know there’s something a bit sissy about turning down the high calorie junk your friends offer you. I’m not asking you to do that. But if you eat a nice big healthy meal before you arrive at the game (I like to have some Shakeology since it keeps me full), you won’t have to turn anything down. You’ll feel so full that the possibility of having another bite won’t even enter your mind. It’s not like you’re on a diet. You’re just not hungry.

At least that’s the way I like to approach it. When I’m out with the dudes, I grab one beer or a glass of wine, and I sometimes pretend that I just ate a huge lunch with my family. Whatever floats your boat. There’s a bit of a half truth in there, but if it eases the social tension and helps you enjoy your time with your friends while still holding onto your fitness goals, go with it. You’ll be happier 90 days down the road than they will be.

Plan your eating schedule around tailgating.
You are allowed some room for cheating here and there. Make tailgating your time to do that. No, you won’t be eating gobs and gobs of chips or guzzling an entire twelve pack like a madman, but you can have some junk. There’s a big difference between allowing yourself a few treats here and there and outright losing control. A few cookies or pretzels a week won’t do much harm, but you can offset your goals with just one afternoon of reckless eating. Be smart.

Pack lean meat.
Where there is tailgating, there is bound to be a barbecue. Just by writing this, I can already smell the hamburgers and hot dogs in the air. If you’re smart, you’ll pack your own lean meat for the party. Bring some chicken breast with a light barbecue glaze or a low fat hamburger patty. You don’t have to tell anyone it’s low fat. Just throw it on the grill and enjoy.

It’s really all about the little things. You can have some of that bean dip, just not as much as everyone else is having. Go ahead and eat a few chips, but don’t get addicted and down the whole bag. Arrive full, and the one hamburger you cook up will be all you really need.

Whenever possible, choose red wine over beer.
There’s a reason they call it a beer gut. Alcoholic drinks are bad enough for your fitness goals, but beer is on a whole different level. Just two or three beers a week can offset any progress you’ve made so far. Why risk it? If you have a choice at a tailgating party, go for a glass of red wine. It doesn’t have nearly as many empty calories, and it might just be good for you in moderation.

The social pressure to drink is the biggest one placed on all of us. If you’re constantly having a few beers every few days, you’re placing a giant roadblock in the way of your success with P90X. If your friends are the kind of people who try to make you feel bad for not drinking with them, you may want to consider spending less time with them and building connections with people who respect your goals.

Tailgating is just one part of the year.
Calling this an article about surviving the tailgating season is a bit of a misnomer. The truth is that people who want to eat junk food and get drunk all the time will always be on the lookout for reasons to do just that. Once football is over, it’s Mardi Gras, then it’s college basketball, and then it’s the 4th of July or so-and-so’s going away for one week party.

You get the point. To be truly successful with this, you have to reconsider the way you think about and enjoy celebrations. Not everything is a cause for celebration or a reason to lose control. Carry this mindset, and you won’t just survive tailgating season. You’ll achieve your goals and stay healthy for the rest of your life.