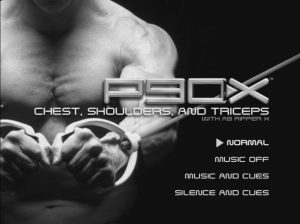 I just completed day 29 of the P90X workout! Today was a new P90X workout, Chest, Shoulders & Triceps. I also had to do Ab Ripper X. During the Chest, Shoulders & Triceps workout you’ll be doing 24 moves. It isn’t like the Chest & Back workout where you are doing 2 sets of each exercise; you are actually doing 24 different moves. This makes the workout exciting since you’re not repeating any of the moves. For the majority of these exercises, you’ll mainly be doing different types of push ups, dips, flys, and tricep kickbacks.  You’ll need your weights or resistance bands, push up bars, a plastic plate, a chair, and water.

The Chest, Shoulders & Triceps workout is a killer P90X workout! I used lighter dumbbells for the exercises than what I’m used to using. I used anywhere from 10 pounds up to 15 pounds depending on the exercise. For previous P90X workouts, the lightest dumbbell that I was using was 15 pounds, and I was able to go up to 25 pounds on some of the exercises. This shows you how intense this workout is!

My muscles got tired very fast, mainly from the push ups! I would max out my push ups, and then when I would get to the next exercise, I’d have to use a light dumbbell in order to maintain good form during the exercise. Just about all of the different types of push ups were extremely tough! The Pike Presses, Two-Twitch Speed Push ups, and the One-Arm Push ups were especially hard. When Tony Horton said we would be doing One-Arm Push ups, my jaw dropped to the floor because I’ve never been able to do a single one of those. I ended up having to do the modified version of the One-Arm Push ups like the lady was doing (can’t remember her name). Evening doing it like that, I was only able to push out a few. It’s funny that we have to do One-Arm Push ups during this P90X DVD, because I told someone the other day how crazy it would be to be able to do a One-Arm Push up since they are so hard. Maybe by the end of P90X I’ll be able to push out a few?!?

Ab Ripper X went pretty good today. It seemed to be a little bit harder than usual, but I guess that’s because it’s been over a week since I’ve done this workout. I took my usual 2 breaks like on P90X day 19. I also was able to get through all of the reps during the Fifer Scissor and the Mason Twists. Lastly, throughout the workout I tried to do the difficult versions of the moves for as long as I could. Hopefully I’ll be sore tomorrow in my abs, because I definitely think I got a good workout!

Lunch: Shrimp (with cocktail sauce), and some whole wheat crackers with peanut butter on them. Also had a protein shake.

Mid-Afternoon: Had the P90X Recovery drink after my workouts.

Dinner: My wife and are going to a local Mexican restaurant for dinner. Prior to P90X when we would go to this restaurant I would usually eat 3/4’s or even a whole basket of the chips with salsa. I’m definitely not going to do that this evening. I’m going to eat very few chips. Also, I’ll probably be getting some type of burrito or enchilada with chicken and some rice and beans (maybe I can get some black beans instead of re-fried beans?). This won’t be the most healthiest meal, but I can stand to take in some extra calories.

After-Dinner: Protein shake or maybe nothing depending on how much I eat for dinner.