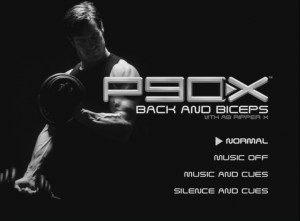 P90X Back and Biceps

Hooollly CRAP! P90X Back & Biceps was insane (in a good way)! I just finished Back & Biceps, and Ab Ripper X, and I’m exhausted!!! As I was doing Ab Ripper X (after Back & Biceps) my arms were shaking when I had to hold my arms up or put them behind my head to do the exercises (hopefully I didn’t over do it). The Back & Biceps P90X workout consists of 24 different moves (different variations of pull ups and bicep curls). It is similar to the Chest, Shoulders & Triceps workout on P90X day 29 in that you are only doing each exercise for 1 set, and then moving on to a different exercise. For this workout you’ll need your dumbbells or resistance bands, pull up bar, chair, towel, and water.

With Back & Biceps, I started out with my usual 25 pound dumbbells, but I very quickly had to go down to 20 pounds, and then down to 15 pounds. All of the different variations of bicep curls beat the crap out of my arms! I tried to stick within the 8-10 rep range, and for the most part I was able to do that except towards the end of the workout. The very last bicep exercise was crazy!!! During the Strip-Set Curl exercise I just used the 15 pound dumbbells for each set (I kind of missed the point of this exercise, but I’ll do it right next time). I started out with 10 reps, than did 5 reps, did 5 more reps, and then 2 reps for the last set.

The different variations of Lawnmowers weren’t all that bad. For those exercises I actually did more than 10 reps depending where I was in the workout. I should have increased the weight during the Lawnmowers, but I was lazy and kept whatever weight was on the dumbbells (with my dumbbells you have to unscrew a big nut on each side to change the plates and I get tired of pausing the P90X DVD to do that). Lastly, I think I did pretty good with the pull ups. I started out strong and was able to pump out 15 Wide Front Pull-ups, and then my reps decreased during each variation. The Corn Cob Pull-ups were pretty extreme! I was only able to do 3 of those.

I really should have taken an extended break before doing Ab Ripper X, but I just wanted to knock it out so I did it immediately after Back and Biceps. I took my usual 2 breaks during Ab Ripper X, but I did the harder version of all of the exercises this time. I also focused on flexing my abs during the moves instead of just pumping them out. I found by doing that, I was able to feel the burn very quickly.

Today was a great P90X workout, and I know I’m going to feel it tomorrow! The stretching during Yoga will should feel good!