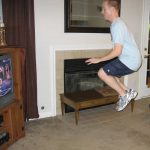 I just completed my P90X workout for the day! Today was Plyometrics and I killed this workout!!! It was tough like usual, but I made sure to “bring it” since it will be several weeks before I do this workout again. I definitely got an awesome workout! I can feel the muscles in my legs throbbing right now as I’m sitting at my desk typing this!

Today I tried to get as much air as I could during the moves that you are jumping off the ground. During the Run-Stance Squat Switch Pick-Up I did all of the reps during both sets, and at the last rep I basically fell to the floor when I attempted to touch the floor (my legs were exhausted from trying to jump so high). It felt great when I got to the Military March since it’s non-impact and it was almost like taking a break!

I was struggling to catch my breath throughout Plyometrics and I was sweating like crazy even though I cranked the air conditioning up (it was 87 degrees here in Hampton Roads, Virginia). During the Run Squat 180 Jump Switch I did all of the reps during the first set, but I didn’t do all of the reps during the second set. My legs just wouldn’t let me keep going! Also, I did the Hot Foot for the entire time during both sets and I finished strong during the Bonus Round.

Breakfast: Bowl of Fiber One cereal and a protein shake.

Lunch: Sliced Chicken sandwich and extra virgin olive oil dressing. Also had 3 celery sticks with natural peanut butter on top of them and a cup of grape juice.

Dinner: I think tonight I’m going to have some fish and a salad.