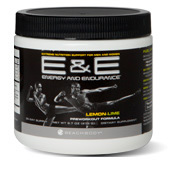 I’ll explain to you what it is, what it does for you, who should give it a try, and I’ll give you my final recommendation of it. So keep on reading as we go on a magic carpet ride! :-) Just kidding about the magic carpet ride.

What is the Energy and Endurance Pre-workout Formula?

As the name states (pre-workout) you take the Energy and Endurance Pre-workout Formula before your workouts. You’ll want to take it 15 to 20 minutes before you start to allow it to start kicking in and do it’s thing.

Who Is It For?

The Energy and Endurance Formula is for anyone who wants more energy for their workouts. If you’re like me and you workout in the mornings, then it’s a great way to wake you up, get you hyped up and ready to workout.

Also, if you workout during the mid-afternoon slump…you know, about 2pm to 3pm or so where you start getting tired and ready for a nap, then this will give you the jolt of energy that you need so you can get an awesome workout.

What’s Inside – Energy and Endurance Formula

One of my FAVORITE things about the Energy and Endurance Formula is that despite it being a pre-workout supplement, it has NO artificial flavors,  sweeteners, or preservatives. It also isn’t loaded with sketchy, untested ingredients.

When you’re dealing with pre-workout supplements, that is NOT the norm. They always seem to be loaded up with ingredients that promise to BLOW YOU AWAY with the energy you get from them. They usually deliver on that, but the trade off is they have controversial ingredients in them. I’m always nervous about taking supplements like that (because I want energy, but I don’t want to kill myself).

Oh yea, and you may have noticed that there is no creatine in the E & E formula. I see that as a good thing since with most creatine you have to cycle it (use it for a few months, and then not take it for month).

So with the E & E formula you can take it with whatever creatine supplement that you want (or none at all) and you’ll still be able to use E & E when you’re in your off cycle with your creatine.

The E & E formula gives you the energy from caffeine that comes from a green tea/herbal blend. This is how ALL pre-workout supplements give you that extra kick. So, if you are sensitive to caffeine then this is NOT for you.

Also, don’t take this within 4 hours of your bedtime, otherwise you’ll have a very long, sleepless night.

Lastly, as always, talk with your doc before starting any fitness/supplement program. And if you have medical condition…don’t ask me if it’s ok for you to take the E & E formula! :-) I’m not a doctor!

Aight, now that you know what it is, now it’s time for my Energy and Endurance Pre-workout Formula review…

It actually tastes good. It’s a lemon-lime flavor and I really enjoy it.

My Experience With This Stuff

Ok, so does the E & E formula really give you more energy for your workouts? I’ve been using it during my P90X2 workouts (excluding the Yoga, and stretch workouts), and I can say without a doubt that it does. I notice a huge difference when I’m using it and when I’m not using it.

After about 10 minutes after taking it, I start feeling a surge of energy from it (that’s the caffeine kicking in). I’ll wait a full 20 minutes, and then I push play. I’m always totally fired up to workout and ready to give 110%.

If you only care about getting the biggest surge of energy and don’t care about the ingredients, then there’s plenty of supplements out there like that.

If you need more energy for your workouts, then I highly recommend you give the Energy and Endurance Pre-workout Formula a try. It’s good stuff and I love how it isn’t loaded with the sketchy ingredients found in most pre-workout supplements. I don’t recommend it to you if you’re sensitive to caffeine.

If you want to give it a try, you can get it here-

==> Get The Energy & Endurance Pre-workout Formula

Well, that’s it! I hope you enjoyed my Energy and Endurance Pre-workout Formula review!