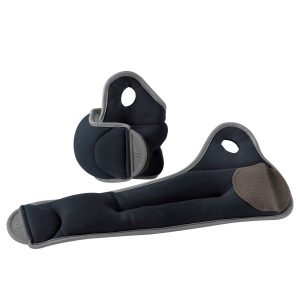 Today is day 52 of my P90X workout and I just finished Kenpo X. I finally found some weighted gloves that I thought were going to be good for Kenpo X, but it didn’t turn out so well. I ended up going to Dick’s Sporting Goods last night and I found a good pair, but each wrist weight was only 1.5 pounds. I wanted to see if could find a heavier pair, so I then went to Sears and I found a pair that were 3 pounds each. I figured those would be much more effective than the 1.5 pound weights so I bought them (they are the NordicTrack 3 lb. Thumblock Wrist Weights).

I was really excited to try them out during Kenpo X. When I put them on just before starting Kenpo X, I had a hard time tightening them enough so they wouldn’t move around (I have pretty small wrists). I figured maybe they would still work, so I started the workout. They definitely didn’t work out! They turned out to be very uncomfortable because every time I’d punch, block or do anything with my arms they would move up and down (the fabric constantly rubbing against my skin did not feel very good). I ended up taking them off after only wearing them for a minute or so and I just finished the workout without them.

I’ll definitely be returning them and I’ll probably go back to Dick’s to buy the 1.5 pound pair (better than nothing at all). I was actually able to try those on to make sure I could tighten them enough so they wouldn’t move around, and they fit great. Even if I had bigger wrists, I’m not sure if the NordicTrack Wrist Weights would work out. They are designed in a way that makes it really hard to tighten them.

The rest of the workout went really well! I tried stepping up the intensity like usual by punching, kicking, blocking, and jabbing as hard as I could. I was just disappointed that I couldn’t use the wrist weights to help take the workout up a notch. I’ll just try again next time!!!

Dinner: I think we are having some type of homemade chili tonight. My wife has some lean ground beef thawing out for dinner.