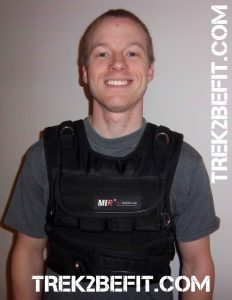 I was doing a TON of reps and I got to the point with a few moves that I’d still be doing reps when the time for that particular P90X exercise would run out. I even started dreading some of the workouts because I kept worrying that I wouldn’t be able to pump out a few more reps then I did before.

I ended up buying the MiR Weighted Vest that was the Short Narrow version that comes with 60 pounds worth of weights (go big or go home, right?). I bought mine here at Amazon (which is sold on Amazon by the manufacturer, MiR) since they had the best deal. This MiR Weighted Vest seemed to be the best version for P90X since it was supposed to fit snugly and I could add a ton of weight to it.

I bought mine on Amazon here for $179.99 and it came with free shipping at the time. The prices are always changing (sometimes the price will be cheaper and then you’ll have to pay shipping), but overall that’s where I found the best deal. I found weighted vests that were a lot cheaper and I also found weighted vests that were a lot more expensive. This one seemed to be in the middle and was reasonably priced especially since it came with 60 pounds of weight.

I’ve gotten to a point where I’ve learned that cheaper isn’t always better. A lot of times you’ll get what you pay for. So I was pretty satisfied with the price of the MiR Weighted Vest.

This was biggie for me and if I’m going to fork out almost $200 for something, I want it to last. When I got my MiR Weighted Vest I was very happy to see that it is made very, very well with very sturdy and super thick material. It’s something you could use every day and I don’t see it ever ripping or getting worn out. I think the velcro will stop working before the MiR Weighted Vest rips, tears etc. They sell replacement straps though (they’re pretty cheap) so even that isn’t an issue. 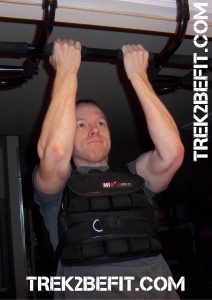 When I threw on the MiR Weighted Vest for the first time (it had 30 pounds of weight in it) I was surprised that it did feel pretty comfortable. As expected, it just felt like I had a bunch of weight strapped to me. The different pockets in the MiR Weighted Vest allow you to evenly distribute the weight so you don’t have poor posture due to having too much weight in the front or the back of the vest.

The real test of comfort was using the MiR Weighted Vest during a P90X workout. The first workout I used it with was the P90X Legs & Back workout. Since it was the first time I have ever used a weighted vest, I did struggle through the workout (which is exactly what I wanted). By the end of the workout my shoulders were somewhat sore from using the vest. Also, when I took my shirt off I had some red marks on my sholulder from where the vest rested on my shoulders.

After a few weeks of using the MiR Weighted Vest I guess my shoulders got stronger or something, because they no longer got sore from using it and wearing the MiR Weighted Vest just felt like I was wearing a heavy shirt (it was comfortable). I could also very quickly throw on the vest and take it off when needed in between P90X exercises that I couldn’t use the vest with without having to pause the DVD’s.

Now there isn’t much assembly required for the MiR Weighted Vest except to put the strap on the vest so you can tighten it snugly to your body, and then you just add however much weight that you want. Having proper instructions on how to set up the strap properly though is where they dropped the ball. The instructions did a crappy job explaining how to set up it up. It was pretty confusing and I even went online looking for an instructional video, and found nothing. Eventually I gave up and had my wife read through the instructions and she figured it out in a matter or minutes.

So I might just not be a good follower of instructions, or they may want to consider creating a video on how to set up the strap for guys like me.

Overall, I’m very happy and pleased with my MiR Weighted Vest purchase. I have no real complaints except for maybe more clear instructions on how to get the strap setup. Or that may have just been just me not following directions correctly…but I still think having a video walking you through setting up the strap would be nice.

Using the MiR Weighted Vest has DRAMATICALLY stepped up the intensity of my P90X workouts. I can even use this vest when my wife drags me out running with her (she loves running and I hate it), I can use it when I take our dog out running (I wear roller blades so I can really wear her out), etc. Once I start the P90X2 workout, I’m going to be loading my MiR Weighted Vest up with weights as I work towards adding a ton of muscle (15+ pounds) in a fairly short period of time.

So I highly recommend the MiR Weighted vest to really anyone who is looking to step up the intensity of P90X, or any other workout program or activity. It’s also great for people looking to bulk up and add some muscle.

I hope that you enjoyed my MiR Weighted Vest review!

If YOU found ANY value out of this post, then make sure to SHARE the love by clicking ANY (or ALL) of the links below so we can share this info with as many people as possible-